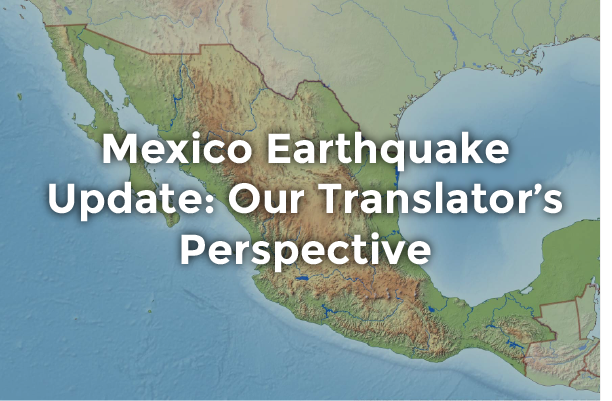 After the recent earthquake that hit Mexico, the inWhatLanguage team reached out to translators affected by the natural disaster. The following story comes from Thelma, our linguist located in Mexico City, Mexico.

A couple of hours later, I was standing outside my building receiving mail. I suddenly felt the earth move once again. Strong. Very. I was immediately pulled away to a safe point by the janitor, we thought everything would collapse, from the noise of the buildings in the complex. That sound, that fear. 32 years later, on the same date. My son was the only thing on my mind: he was on a field trip in a Xochimilco Market. It was useless to use the cell phones. Some minutes later, we were able to send text messages, only for seconds. Communication had to be quick and direct. Are you OK? seemed to be the code.

When we were let into the building, I found only broken glass and minor cracks on the ceilings. I was one of the lucky ones. Power was out and the only way to communicate with the world was through cell phones, when they worked. Still no way to reach the kids. News started flowing in, sirens, ambulances. Facebook and Twitter became the fastest means to ask for help. No other posts were seen for days.

Once again it had happened: the big, crowded Mexico City was down. News from collapsed buildings, children were still in school, many of them were not very safe. People started to ask for hands, help was needed all over.

My son was on a school bus, they had left the market just five minutes before it all happened. That building collapsed. The bus stopped when they felt it, and the kids got very scared; when they finally reached the school, the school authorities decided to keep them there until it was safe to send them home. Rumors of gas leaks were all over the city.

My brother was driving back from Cuernavaca (in the state of Morelos, the epicenter of the earthquake) and he had to stop a few times because stones fell onto the road. We were barely able to talk. He decided to continue driving, and arrived safely.

My sister was at her office in a Government building. She was rushed out between falling pieces of ceiling and wall plastering, through the emergency staircase, built for fires, not for earthquakes. She was so nervous she could not take her shoes off and they carried her out. All safe, and accounted for, thank God.

Power was out for most of that day. Batteries ran out. People driving into the City. Help was needed, people were trapped. Once again, we all went out on the streets and volunteered. Once again.

My 19-year-old nephew put on his uniform, and left for the sites. He volunteers at CADENA. After the 1985 earthquakes, the Mexican Jewish Community, my Community, formed an organization dedicated to help on National Disasters, and all the help is delivered and performed directly, from hand to hand. Not through the government or any intermediaries. They started requesting supplies and hands. We could sometimes reach my nephew by text messages. He had to help. He had to be there. This what he was trained for, he is part of the Go-Team. They were saving people. Many were alive and trapped inside.

On that same night, most of our Jewish schools became collection centers to gather donations and organize care packages, food for the volunteers, medical supplies, and much more. Improvised shelters started to operate, as many people were on the streets.

My nephew managed to get home for a few hours after one day, ate something, washed his clothes, and slept an average of 3 hours before going back. There was no way to stop him, time was crucial. Hope kept them going. They teamed up with the volunteers and the international rescue teams that arrived as fast as they could, Israel being one of the first ones, sent an elite team of 72 soldiers specialized in disasters, leaving their homes a day before the High Holidays. We could not thank them enough. I will never forget his eyes the day I saw and hugged him for a few seconds, before he left again.

One of the iconic Synagogues of our Community was badly affected. Closed and not fit for the services for the Jewish High Holidays, just a day later. We all wanted to help. The children’s service at my Synagogue was transformed from a day-care to a big production room to prepare sandwiches for the volunteers. The JCC was transformed into a camping site for the Israeli team, and we made sure they had everything they needed.

The fear. You can still feel it and breathe it. We were all scared for aftermaths. You never know. A lot of us slept dressed and with the keys at hand during the first days.

So here we are. Trying to get back to normal, helping out. Reconstruction is in full motion. It will take a long time.

But overall, grateful for being Mexican and in Mexico. Our people are the greatest and strongest. Once again, we all became a big crowd of hands and help. If we had any doubts in regards to our ability to educate and transmit values, we can feel extremely proud. 32 years later, a new generation went out and helped. In the same manner. With the same determination. Mexico is alive, and we stand on our feet.

inWhatLanguage is a translation services company dedicated to breaking down language and cultural barriers. Using their centralized, real-time TMS UNIFY, they utilize a network of professional linguists to provide high quality translations at a price you can afford. The work we do would not be possible without our amazing linguists.